When recreational activities were limited by the coronavirus pandemic during the summer of 2020, Marty and Grace Trendel turned to golf. The Chicago-area couple relocated to Florida several years earlier and had never really played the game before, but were interested to learn. Perhaps more importantly, they were eager to get outside, breathe fresh air without masks, do something active, spend some time with friends, and escape to bit of normalcy.

Living in the Orlando area, the Trendels would often visit the Disney parks in their free time and realized their annual passes included free golf at one of the facilities in the Disney Golf portfolio: the 9-hole, walking-only Oak Trail course. Grace, a senior mortgage consultant, and Marty, an estimator for the manufacturing of architectural specialty products, decided to give golf a try as an alternative to the parks.

Like many new golfers, they didn’t want to invest too much money to start, borrowing some older clubs from friends and buying a couple of $30 pull carts to play Oak Trail. Some friends who played golf showed them the ropes, inviting them just about every weekend to another 9-hole course nearby, Marriott Grande Vista, and teaching them more about the basics, like rules and etiquette. The Trendels found a Groupon for an instructor who gave private lessons at Orange County National, home of the PGA Merchandise Show’s Demo Day, and quickly became hooked on the game — just two of the record 6.2 million beginners who have taken up golf in the U.S. over the past two years of the coronavirus pandemic. 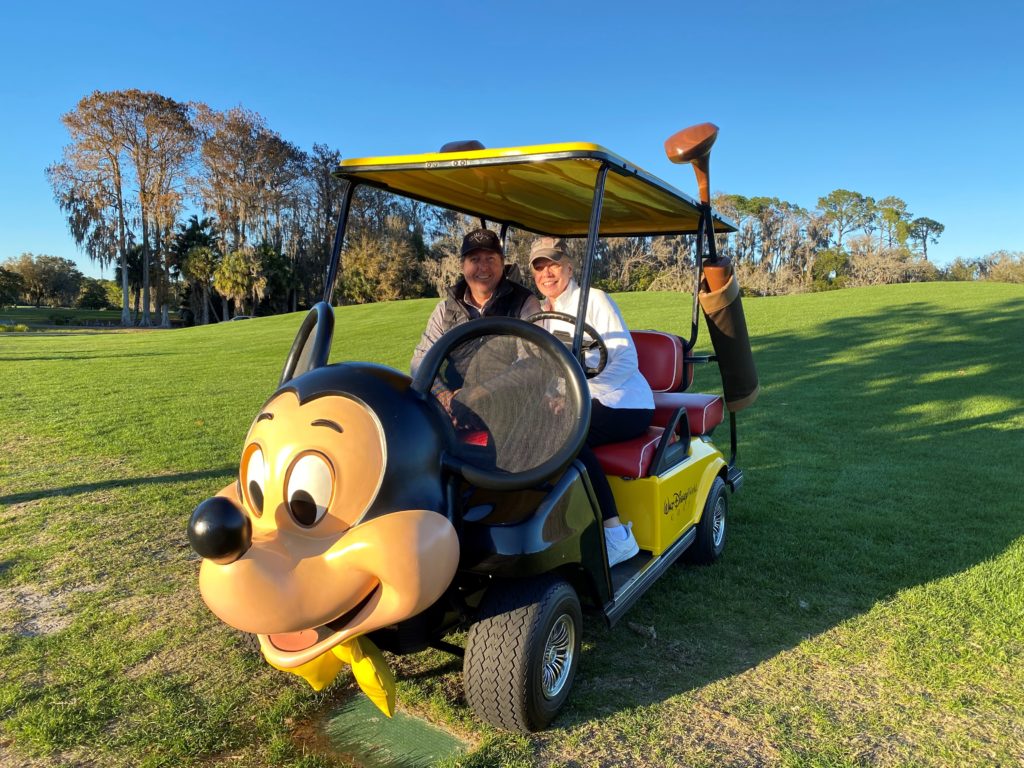 Marty and Grace Trendel took up golf for the first time in 2020. They quickly become converts, each playing close to 100 rounds in 2021. They remain an exception in the golf industry rather than the rule.

When their Disney park passes came up for renewal, the Trendels joined the Disney Player’s Club, a membership that gave them access not only to discounted times at the property’s four courses, but access to free group clinics with teaching professionals. They upgraded their gear, got fit for new clubs, bought new apparel, bags, push carts and other accessories, and even invested in a mat and net for their backyard. While joking about how they “live at Golf Galaxy and PGA Tour Superstore,” Grace says the couple tries to play once or twice a week, including after work for nine holes during the summer. They even started tracking their progress on a spreadsheet Marty keeps, so they know they played almost 100 times each in 2021. The average number of rounds per golfer in the U.S. was 21 last year, a total that breaks out to roughly three times a month from April through October.

“We loved it right away,” said Grace Trendel. “We couldn’t believe how great it was to be out walking in nature, and it was so relaxing. Such a respite from the crazy Covid world; you really forget that all of that stuff exists when you’re out there. It made me feel like a kid again — running around on grass for hours on end, with no ‘responsibilities’ that normally gnaw at your mind. As adults, we spend so much time in big cities, or indoors, or shopping, or working, dealing with a million responsibilities, that you really do forget what it felt like to be outside playing. I always say, ‘It’s just what the doctor ordered,’ when I’m out there de-stressing from my fast-paced, high-intensity job.”

The 3.2 million Americans who played on a golf course for the first time ever last year was up 33% from just two years earlier – pre-pandemic. And consider that those 2.4 million newcomers who took up the game in 2019 equaled the beginner influx in both 1999 and 2000, when Tiger Woods was drawing new faces to the game in then-record numbers.

The challenge the industry continues to face, however, is converting newcomers into committed golfers. This was the case during the “Tiger Boom” years, when the total golfer population increased but the average number of rounds played per golfer decreased, indicating that many newcomers weren’t that serious about the game, didn’t play much, and didn’t end up sticking with it.

While there are golfers every year who age out, leave the game (whether permanently or temporarily) and even pass away, it’s telling the total population of on-course golfers in the U.S. has seen a net increase of 1.3 million over the past five years. Over that same span, almost 14 million beginners have given golf a try, with almost half coming these past two years. Yet conversions – like the example of the Trendels going from newbies to avid golfers – remain the rarity.

NGF’s latest surveys indicate that this type of conversion rate, rather than just retaining someone as a casual, occasional participant, is about 27%, meaning only about one in every foursome of beginners really ends up sticking around. “Far too many golf facilities don’t care about new golfers, and I find when all I do is return a phone call to one of them, they are shocked that I do,” said Tony Brooks, a PGA Master Professional who founded the Lion Junior Golf Academy that has locations at six Southern California golf facilities. “Case in point, I called back a new golfer who let me know he contacted six other facilities in the area, and no one contacted him back. Lucky for me I did, and was able to establish a good relationship right away and engaged his family.”

“I believe the experience the golfer gets and the relationships that are formed from the start is key to turn non-golfers into golfers, and golfers in loyal patrons,” added Brooks, who is one of the instructors involved in NGF’s Welcome2Golf effort to introduce more adults to the game. “However, the amount of facilities doing this is a drop in the bucket.”

NGF research has shown that follow-up from someone from the facility where a new player was introduced to golf is one of the most impactful factors related to the conversion pathway from beginner to committed golfer. Other commonalities include:

Some operators are making beginner introduction and golfer retention efforts more of a priority.

KemperSports, one of the nation’s top golf management companies, in 2021 launched its ‘All Welcome’ initiative that’s designed to attract, welcome and retain new and diverse golfers at its more than 75 U.S. facilities. One of the key components to the program is to identify and welcome new customers and new golfers through property databases. Staff at KemperSports courses are provided with content and programming ideas to help engage with those who are identified as new golfers – from offering 15-minute complimentary lessons to virtual/social instructional content and player development clinics.

Golf is in a good place at the moment.

Play and participation are up and engagement is strong.

But the growth opportunity presented by the coronavirus isn’t one that’s been created by something the industry did differently. Taking advantage of that opportunity requires meaningful action for long-term growth. If you’re an owner, operator or other invested stakeholder, are you doing anything differently to encourage and engage beginning golfers? We’d love to hear about it.