PING’s has long been one of the top-selling club manufacturers in the game, with an equipment focus on clubs from drivers to putters.

PING got its start in 1959 because Karsten Solheim, a General Electric engineer, was not satisfied with the current putter options on the market. The company began as a one-man operation out of Karsten’s garage. Utilizing “heel-toe” weighting—a novel concept in the late 50s—Solheim’s first putter made a “PING” sound whenever he would strike a putt, leading him to name it the PING 1A.

Over time, the PING 1A putters (and their heel-toe weighting) gained popularity, to the point in which Solheim decided to quit his job at G.E. in 1967, six years after the company transferred him from Redwood City, California to Phoenix, Arizona. A year prior, Karsten attended the 1966 Los Angeles Open where he was disappointed by the endless amount of simple blade putters. He wanted to create something better. This experience was the inspiration for the development of the Anser putter which would go on to become one of the most iconic clubs in history.

Today, PING (which operates as a subsidiary of Karsten Manufacturing Corporation) remains a family-owned business with John K. Solheim, grandson of Karsten, serving as President and Karsten’s son John A. Solheim serving as CEO. 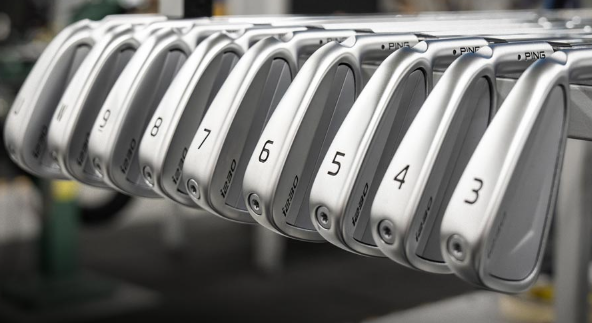 The company is still headquartered in Phoenix where it continues to design, engineer and assemble its products. The brand’s portfolio has expanded to include a complete line of high-quality men’s, women’s and juniors golf clubs as well as bags, headwear, gloves and on-course gear.

PING has also been able to build and maintain a focus on forging relationships with professionals across all major golf tours. Notable PGA and LPGA members that are signed on with PING include Stewart Cink, Tony Finau, Viktor Hovland. Joaquin Niemann, Bubba Watson, Brooke Henderson, In Gee Chun, Leona Maguire, and Angela Stanford.

In addition to developing the highly innovative Anser putter (considered the “winningest” putter of all time, as it has been used during 500 professional golf victories), Solheim began to create heel-toe weighting irons as well. The company also manufactured the game’s first high-quality cast clubs and offered factory fitting — through clubheads that provided different lies and lengths — for the very first time.

PING has carried on its successful legacy as an innovator in the equipment space while staying true to its roots as a family-owned and run business.

The cast irons Karsten Solheim created helped change the equipment industry and the iconic (and unique-looking) Ping Eye iron line dominated the market in the 1980’s. The process of investment casting helped pave the way for many of today’s innovations, as club designers became better able to pinpoint weight distribution in club heads.

The new approaches adopted by Solheim – a member of the World Golf Hall of Fame – not only put PING on the map as an innovator in the industry but opened the door for other manufacturers and ushered out the era of persimmon drivers.